G-Technology's 8TB G-SPEED eS 4-BAY RAID Array with four 2TB Enterprise Drives is an economical, high-performance, high-storage solution designed for professional video content creators. This compact and whisper-quiet G-SPEED eS sports a 3Gbit eSATA interface great for transmitting the large amounts of data demanded by video files. It features the maximum memory per G-Speed eS with four 2TB hot-swappable Hitachi Ultrastar 7200 RPM SATA drives. With this Enterprise-quality setup, you definitely have the memory you need to store video and to speedily and easily access it for streaming.

Beyond all these exceptional features, should you ever decide 8TB of memory isn't enough, you also have the option of scaling up. If you use the G-Tech PCIe RAID controller, you can connect up to four 8TB G-SPEED eS enclosures at once. With another company's host adapter, you might be able to do the same, depending on what it allows. If you do go for the maximum amount of scalable memory, you can connect four enclosures of 8TB apiece for a total of 32TB of memory!

All told, the 8TB G-SPEED eS is an economical, high-storage, high-performance RAID hard-drive array designed with all the right features to keep you, the professional video content creator, busily at work!

With the G-Tech PCIe 4x RAID controller, you can connect up to four 8TB enclosures at once for 32TB of total storage capacity 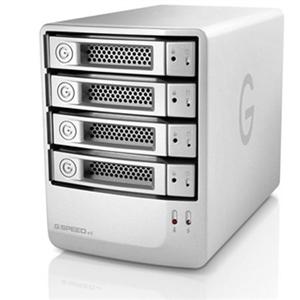