G-Technology's 4TB G-SPEED eS PRO 4-BAY RAID Array with four 1TB Enterprise Drives is a cost-effective, high-speed, high-storage solution. A bit faster than the G-SPEED eS, this compact and whisper-quiet G-SPEED eS PRO sports a 12Gbit mini-SAS interface that is great for transmitting the huge amounts of data demanded by video files. It also features four Enterprise-quality 1TB hot- swappable Hitachi Ultrastar 7200rpm SATA II drives. The drives have the storage you need to hold video files and to speedily and easily access them for streaming.

Since a mini-SAS host adapter for connecting the unit to your computer is not included, you have two options for deciding on one. You can use another company's 2-Port mini-SAS PCIe Adapter or you can go with G-Tech's 2-port PCIe x8 IOP RAID controller with 512MB RAM. In either case, you will need a controller for configuring your RAID options. If you go with another company's controller, you will need to check its RAID capabilities. If you use G-Technology's version, you will have a wide variety of RAID options. The controller allows you to configure your G-SPEED eS PRO as a RAID 0, 1, 3, 5,6, 10 or JBOD. As such, you have wide flexibility in choosing the right configuration for your work, whether you need more storage, extra reliability, simultaneous access to video files, or some ratio between the three. When used with this controller, it supports multi-stream SD, ProRes 422, uncompressed HD and 2K DPX workflows. For example, a single G-SPEED eS PRO used with this G-Tech controller supports up to four simultaneous streams of ProRes422 HQ or one stream of 10-bit uncompressed 1080/60i. Moreover, in terms of just storage capacity, one terabyte of memory holds up to 84 hours of HDV 1080i, 17 hours of DVCPRO HD 1080/60i, 13 Hours of 8 bit SD, 10 hours of ProRes 422HQ, 10 hours of 10 bit SD, and 2.25 hours of HD 1080/60i.

When used with G-Technology's controller, you can setup your RAID configurations and monitor your system via an easy-to-use, web-based graphic user interface. Accessed via any internet browser on your computer, this simple GUI can easily keep track of your RAID's performance and, in the event of a disk failure, have the G-SPEED eS PRO alert you via email.

Along with this safety mechanism, the G-SPEED eS PRO features locks for each drive, a sturdy aluminum casing, and two internal fans for preventing the hard drives from overheating. In addition, the G-SPEED, itself, will sound audible alarms in case a disk fails, the internal temperature nears 140°F, a fan stops, a fan spins too slowly to cool the system, or when the enclosure is improperly disconnected from the G-Tech RAID controller.

Beyond all these exceptional features, should you ever decide 1TB of memory isn't enough, you also have the option of scaling up in a few different ways. You can replace all of the drives in the G-SPEED eS PRO enclosure with 2TB drives (because you can't mix and match them) for 8TB per enclosure. In this case, you can still use another company's mini-SAS host adapter or the G-Tech's version. With the latter, you can also both upgrade your enclosure to 8TB and connect up to two G-SPEED eS PRO enclosures at once. If you do go for the maximum amount of scalable memory using the G-Tech controller, you can connect two enclosures of 8TB apiece for a total of 16TB of memory!

All told, the 4TB G-SPEED eS PRO is a super-fast, high-storage, high-performance RAID hard-drive array designed with all the right features for high-end post-production work.

Enclosure alone is scalable up to 8TB and with the 2-port, G-Tech PCIe x8 IOP RAID controller, up to two 8TB enclosures can be connected at once for 16TB of total storage capacity 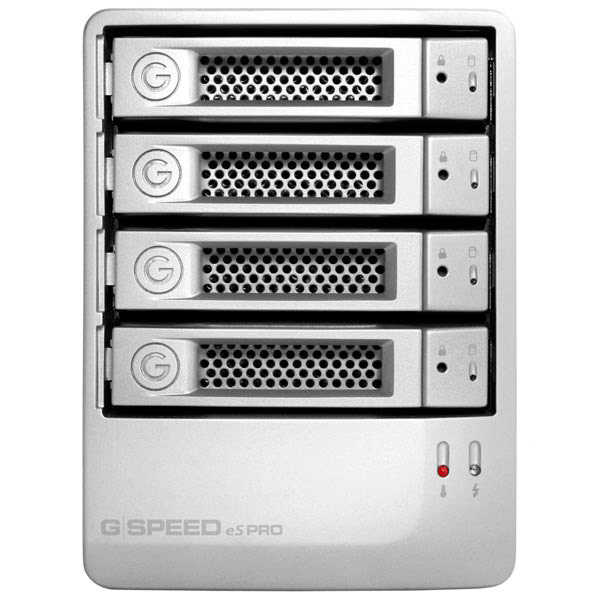